A wave is disturbance that travels through a medium from one location to another location.

Medium - What carries the wave, the material 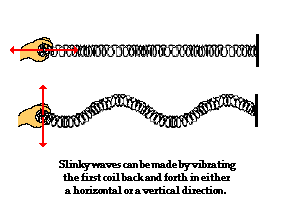 *There is one critical difference between oscillation and wave motion: whereas oscillation involves no net movement, but merely

movement in place, the harmonic motion of waves carries energy from one place to another.

Parts of the Wave

Crest - Top of the wave

Trough - Bottom of the wave

Wavefront - Parts of the wave that are moving together. (when a rock drops into a pond a circular shape formed by all the waves that

were created at that moment for the wave front)

Ray - The ray highlights the direction of energy transfer

Longitudinal: (look next page for the picture)

Compression - Point where theres high pressure, everything bunched together

Rarefaction - Point where there is low pressure, everything is far apart

Transverse - When the motion of the medium is perpendicular to the direction of the wave. (Wave goes left or right, medium goes up 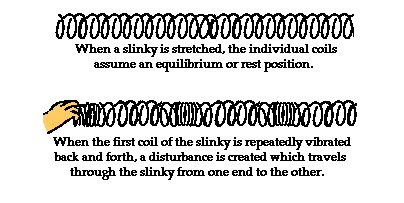 Transverse waves propagate in solid because solid particles have an equilibrium position where they are pulled back to. While its

being pulled out of its equilibrium position it pulls the neighbor particles and thus create the wave.

Transverse Waves cannot propagate in gas because gas particles do not have an equilibrium position. They are held freely only

binded by the average distance it has to maintain with one atom and the other.

Displacement  (x) - Distance in meters that the particle moves from its original position.

Amplitude  (A) - The maximum displacement from the original position. The amplitude is only constant if it doesn’t lose any energy.

Period  (T) - The time it takes to go through one complete oscillation. Measured in seconds

Frequency  (f) - The number of oscillations that take place in 1 second. Measured in Hertz Hz

Wavelength  (λ) -       The shortest distance between two crests beside each other.  (or any two points that are in the same "step" as

the other as in same position but different times) In meters. 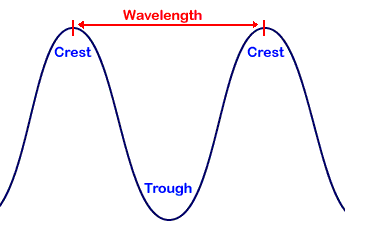 Wave speed  (v) - The speed in m/s that the wave fronts pass a stationary observer.

Intensity  (I) - Power per unit area that is received by the observer. Average energy carried by the wave. Measured in W/m2

*The intensity of a wave is a proportional to the square of its amplitude: I ∝ A2

Period and Frequency are inversely related!!

These two don’t specify if it's Transverse or Longitudinal

The displacement - time graph represents the oscillation for one point on the wave.

Every point oscillates at the similar manner, but they start at different times 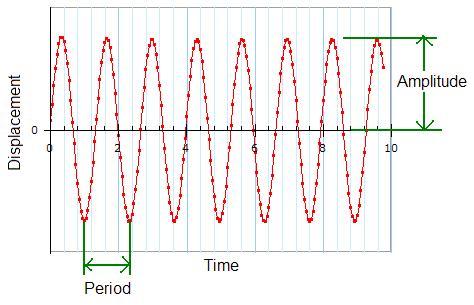 The Displacement - position graph works like a snap shot of all the points at one instant. From this graph we can measure the

wavelength and the amplitude at given points. 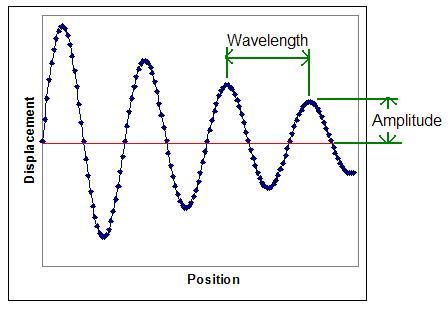 The Period: time it takes for one complete oscillation

During 1 period the wave pattern will have moved by one wavelength.
*Note  f = 1/T 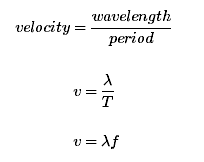 Reflection - The change of direction of a wave when it bounces off a medium.

Refraction - The change in direction of a wave while it goes from one medium to the next. This happens because of the change in speed of the wave as it goes through a new medium 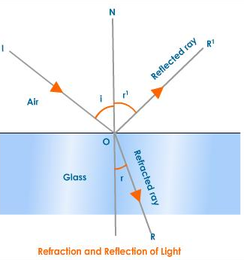 The original wave is partially reflected and partially transmitted.

The wavelength is smaller in the refracted ray if the speed is reduced. 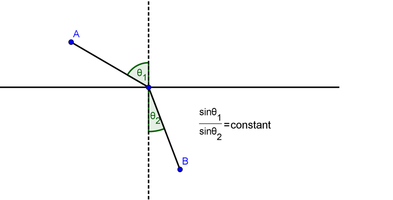 
Diffraction - The tendency of waves to spread out when they go through an opening or around obstacles.

The diffracted wave is as if a new wave started at the point where the opening is at with a circular wave.

Interference happens when two waves of the same type meet and a resulting wave occurs.

Principle of Superposition - The resulting displacement of the medium at any location is the sum of the displacements of the individual waves at that same location. 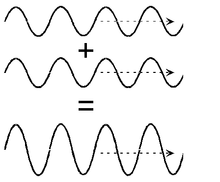 When waves have the same amplitude and same frequency then at a particular point it can be:

Constructive Interference - When both waves have displacement in the same direction (In phase) and thus there vectors get added to form an even larger displacement.

Destructive Interference - This occurs when the waves have different direction of displacement (1 up, 1 down; Out of phase; difference 180 degrees) and thus they cancel each other creating a smaller displacement to one direction or none at all. 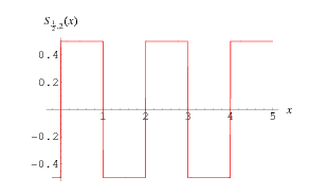 Square waves are non-sinusoidal waves like the previous ones. These waves change

their amplitude abruptly and oscillate between fixed values. The graph above

The waves vary between fixed minimum and maximum points at a steady frequency.

In the above ideal Square wave the transition between Maximum and Minimum as we can see on the points x= 1; 2; 3; 4 are

These waves are often found in electronics and signal waves. Square waves are always encountered in digital switching circuits and are

produced by the binary logic devices.

In sound terms these waves are said to sound hollow.